Last year I was invited to be involved in World Turned Upside Down, an exhibition in Leeds curated by illustrator Si Smith with support from Leeds Inspired.  Artists and poets were asked to make work in response to the Beatitudes – the 8 statements from the Sermon on the Mount. 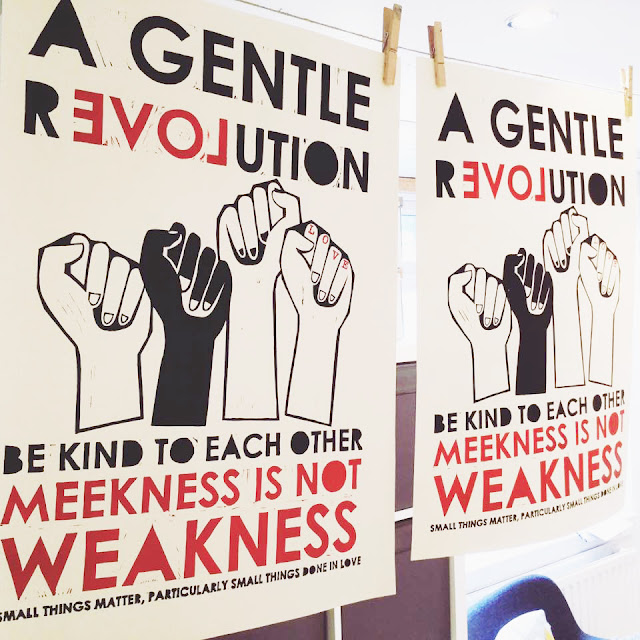 Initially I found it hard to see how these words relate to us at this time.  They are words that invert our power structures.  The opposite of the power-hungry, greedy and ruthless values we often see in the people that run our countries, who don’t seem to consider the meek and those without a voice; the poor, the very young, the sick and the elderly – the most vulnerable in society.  This is particularly marked at a time of fallout from Brexit, which seemed to bring out an openness in racial hatred and the USA voting for a person as self-serving and prejudiced as Donald Trump to become their leader – both are shocking and depressing.

Si Smith’s inspiration for the exhibition came from an unlikely source:

'At Donald Trump’s inauguration ceremony, the Beatitudes were read.  That struck me as a truly dissonant moment and – whether deliberate or not – a pretty direct rebuke to the values that he represents.  Because whilst we’ve succumbed to the belief that it’s the richest, the strongest and the most powerful who’ll always and inevitably triumph, the message of the Beatitudes is that in the end, it is actually the meek who’ll inherit the earth.’

The idea of re-imagining a world turned on its head is a refreshing starting point for making new work.  Using the classic visual style from revolution posters from the past as an influence, I was drawn to the Beatitude about meekness;

Blessed are the meek,
for they shall inherit the earth.

The idea of meekness, or gentleness, being of greater value than power, status and riches is alien in our society, but at the same time I can’t help thinking people need to know the bullies don’t have to always win.  I’ve never considered myself a particularly political person and am naturally quite shy, but last year I felt compelled to join marches and rallies to support change.  I am supporting a gentle revolution with kindness at its centre.  A rise in gentleness, thoughtfulness and compassion for our fellow humans.  It is important not to confuse gentleness with passiveness or apathy, it is just a different way to communicate – meekness can be very powerful.  Making this piece of work has made me mindful of the fact that we don’t always have to make big showy gestures to make a difference.  The small act I can make each day to show an individual some kindness is equally as powerful and important.

I have never made a piece of work that has received responses like this print.  I have been encouraged by the passionate and inspiring conversations it has provoked in people of all ages.  Some people felt compelled to buy the print to share these values with their family every day.  Other people may not have found the print to their aesthetic taste, but have told me that it made them cry. When I hear things like this it makes me feel quite emotional, I think this is due to a feeling of solidarity, the idea that my values resonate with someone else.  That maybe we really are having a gentle revolution.
You can buy one of these limited edition 'Gentle Revolution' lino prints from my online shop.
Posted by ruby and the paper parade 1 comment:

I have blogged before about the process of a cathartic declutter in my studio and lately I had been feeling like something similar was brewing.  My studio was the visual representation of how my head has been feeling recently – messy and chaotic. 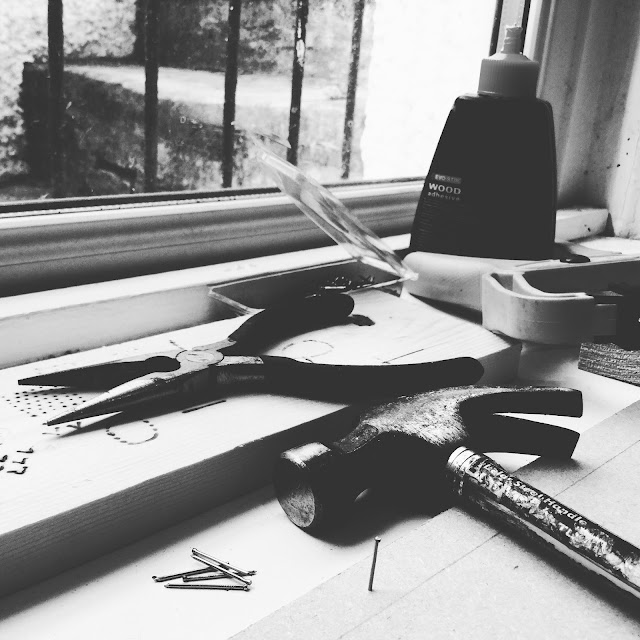 I am in the hugely fortunate position to use a room in the shared studio of my parent's house; both creatives, they set up the basement studio space when they moved in 14 years ago.

Recently, the scale of my prints and the different areas and way I work has changed.  I felt like my studio and I had grown apart – I wasn’t working efficiently or effectively.  It was time for a change, time to find a new studio.  I admit to feeling a little anxious about not wanting to seem ungrateful when talking to my Folks about the change, but they were brilliant and rather than moving studio they were willing for me to update my part of the studio space in order for it to work better for me and the way I work now.

The first change I needed to make was to get a plan chest to store large prints away – giving me more table top space, but also making it easier to keep the prints organised, clean and safe [these were previously taking up a large amount of space on my worktop, being shunted about from surface to surface in order to work around them].  I looked for second-hand chests and couldn’t find anything that would work in my space, so I decided to build one into an alcove.  My husband helped me to construct a framework for drawers to slot into – this was tricky as the alcove walls were far from square or straight!  I then set about constructing drawers and shelves.  I purchased new storage crates that would fit into the shelf unit we had created.  I have to say I am delighted with results.

My second issue was work space and a  lack of permanent storage, rather than items stored in plastic boxes, then stowed under my desk.  I acquired upright shelf units and storage boxes which took up less floor space.  The desktop that I had been using was brilliantly ‘multi-use’; office space/printing bench/jewellery making station/mounting and framing surface, I felt it was time to compartmentalise these different areas of my work so I removed the large built-in desk and created a separate office.  I purchased two extendable tables so that I could have as much or as little work surface depending on the requirements of my current project, but also meaning I can have two separate projects on the go [as is often the way].

Lastly, I made the decision to include an armchair into my new work environment – not as you might think for tea breaks [though this is a bonus], but actually a fair amount of my work I make on my knee in the comfort of my sofa at home in the evenings and it struck me that this simple addition to my studio might help me alter my perspective on saving the less 'heavy-weight' work for my ‘down time’ and treat it as equally significant to the running of my business as other areas of my work.  Embracing the work that encourages me to nestle down rather than only valuing the work that means I'm hurtling around feeling like I'm 'getting things done'.   Now that the chair is in and the desk has been taken out from below the window I can now sit in good daylight to work on stitching, making and writing.  I love it!

So now the reshuffle has happened my head feels calmer and clearer [and I know where everything is!].  The space feels like mine.  No excuses now to get on with some work……!


Posted by ruby and the paper parade 4 comments:

I will be running more lino printing workshops for beginners in my Southville studio [Bristol] over March and April.

During this 3 hour course you will learn how to use your own design to cut a lino block and make a one-colour print picture.  You will be using oil-based printing inks and have the opportunity to try both hand burnishing and using a table-top printing press.

All materials are provided within the course fee [along with tea, coffee and biscuits!]
Please note you will need to bring an apron or wear old clothes.

There are 2 new dates to choose from:


See here and here for previous workshops I've run in my studio.  If you are interested please get in touch via ruth_pea@yahoo.co.uk
Posted by ruby and the paper parade 1 comment: 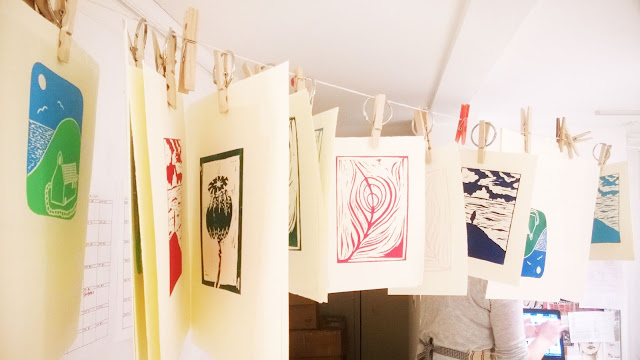 Last week I opened up my studio for a beginners lino printing workshop.

Taking place in the evening, the workshop was attended by a lovely group of people all open to trying something new, just for fun.  There was no pressure to produce masterpieces, but each person designed something really individual and the prints were all completely beautiful. 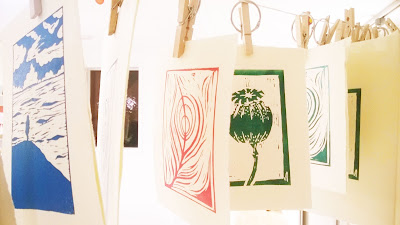 If this has inspired you to try some lino printing I will posting some new workshop dates in the next few days, or contact me directly at ruth_pea@yahoo.co.uk
Posted by ruby and the paper parade 1 comment: 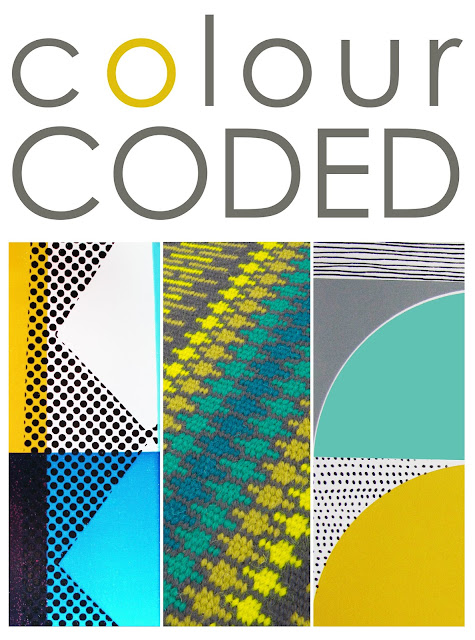 I have been working on new prints for this group exhibition at the Devon Guild of Craftsmen. 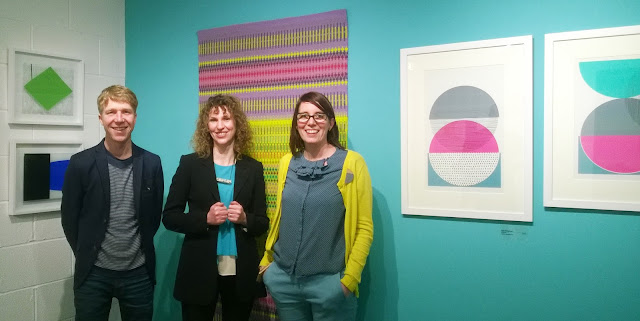 In Colour Coded, each maker has drawn upon skill sharing sessions and group discussion to explore personal responses to the themes of colour and shape.

Posted by ruby and the paper parade No comments: 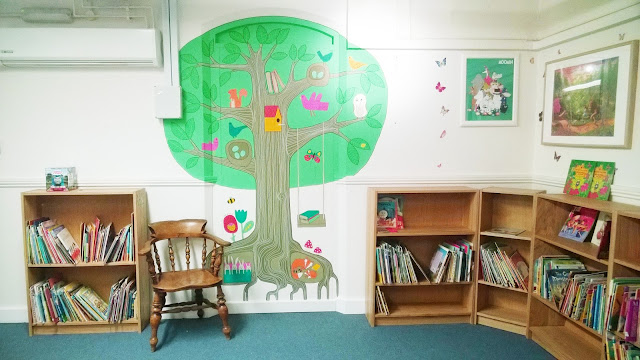 In January I was asked to paint an illustrative tree mural in the infant library at Compass Point School, Bristol.  This picture would form a backdrop to the 'story chair'. 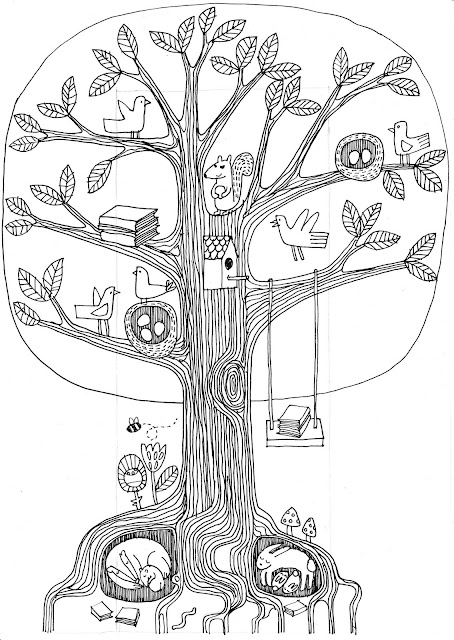 It was a lovely open brief, so I was able to put in all sorts of fun creatures and choose the style of design.  Which meant I could be very organic about how I painted the tree and change and add things as I went along.

Here are some photos showing the work in progress: 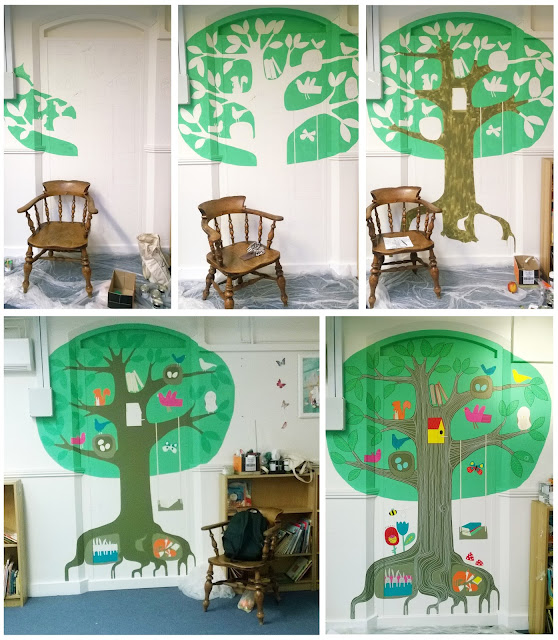 A bit of a close up of some of the details in the mural: 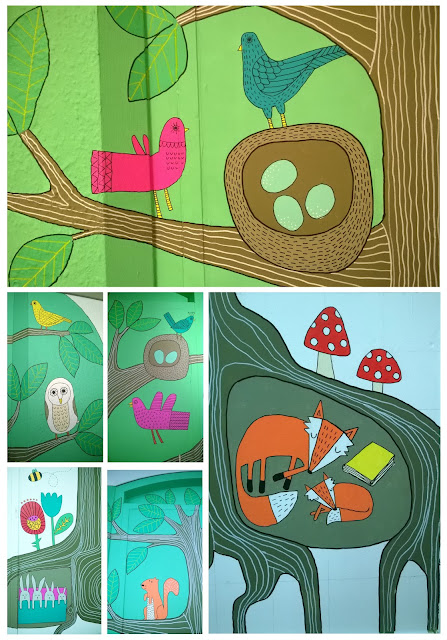 This was a lovely project to work on.  If you would like to commission me to paint an uplifting mural for your school, hospital, church or work space please get in touch.
Posted by ruby and the paper parade No comments:

I will be running lino printing workshops for beginners in my Bristol [UK] studio in 2016.

During this 3 hour course you will learn how to use your own design to cut a lino block and make a one-colour print picture.  We will be using oil-based printing inks and you will have the opportunity to have a go at both hand burnishing and using a table-top printing press.

All materials are provided within the course fee [along with tea, coffee and biscuits!]
Please note you will need to bring an apron or wear old clothes.

If you think you might like to try something new in 2016 or if you want to give a unique Christmas gift get in touch via ruth_pea@yahoo.co.uk
Posted by ruby and the paper parade No comments:

ruby and the paper parade
Welcome to Ruby's! Follow me in my little celebration of printing, drawing and making, and everything in between!

Ruby and the Paper parade shop

Ruby and the Paper Parade